With the 100th anniversary of his birth on September 7, 2015 Dick Cole has long stood in the powerful spotlight of fame that has followed him since his B-25 was launched from a Navy carrier and flown toward Japan just four months after the attack on Pearl Harbor. In recognition the tremendous boost Doolittle’s Raid gave American morale, members of The Tokyo Doolittle Raiders were awarded the Congressional Gold Medal in May 2014.

Doolittle’s Raid was only the opening act of Cole’s flying career during the war. When that mission was complete and all of the 16 aircraft had crash-landed in China, many of the survivors were assigned to combat units in Europe. Cole remained in India after their rescue and was assigned to Ferrying Command, flying the Hump of the Himalayas for a year in the world’s worst weather, with inadequate aircraft, few aids to navigation, and inaccurate maps. More than 600 aircraft with their crews were lost during this monumental effort to keep China in the war, but Cole survived and rotated home in 1943. He was home just a few months when he was recruited for the First Air Commandos and he returned to India to participate in Project 9, the aerial invasion of Burma.

“Dennis Okerstrom is establishing himself as one of the leading scholars of the American combat aviation experience in World War II. As an academic and an experienced pilot, Okerstrom brings a unique blend of skills to this topic. With his pilot’s penchant for detail and his professorial eye for high quality scholarship, Okerstrom illuminates the mindset of combat aviators like few other authors. He is also a skilled writer with a real knack for bringing this important subject to life.”
—John C. McManus, General Editor of The American Military Experience series 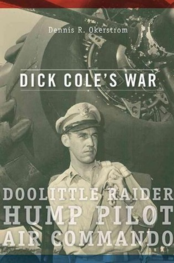